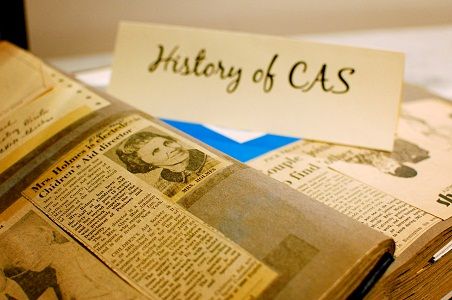 Children’s Aid Society of Alabama (CAS), formed in 1912 and incorporated February 21, 1913, is a nonprofit agency serving children, youth and their families.  CAS was formed prior to the creation of the Alabama Department of Human Resources (DHR) by a group of Alabama citizens who were concerned for the well-being of children.

Since 1912, social workers and counselors from CAS have provided services to support families in an ever changing society. In our early years, we operated the local juvenile detention center and two orphanages. By the mid 1900's, foster care, adoption services, and emergency assistance programs were introduced.

Licensed since 1943 as a DHR Child Placing Agency, CAS is a founding member of United Way of Central Alabama (UWCA) and the Child Welfare League of America.

The 21st century began with the addition of in-home Family Intervention Services, Post-Adoption Services under contract with the Alabama Department of Human Resources, Disaster Relief services through an initiative with United Way, and our federally-funded Project Independence to provide housing and life support for homeless parenting teens and their children. Family Options services funded by The Department of Human Resources allowed us to work closely with families who were struggling to care for their children. Through the Alliance partnership, Continuum of Care services were introduced to expand treatment options to children and their families.

CAS was the 16th agency in the US accredited by the nationally recognized Council on Accreditation (COA) and has held its accreditation status since 1978 by undergoing intensive reviews every four years. Accreditation demonstrates that CAS effectively manages its resources and provides the best possible services.

CAS is a member of the National Network for Runaway and Homeless Youth and the National Safe Place Network, where the CAS CEO serves on the Board of Directors.  CAS is a member of the Alabama Association of Child Care Agencies, where the CAS CEO currently serves as President and works with its executive committee to build and maintain positive and productive working relationships with DHR leaders and staff.  CAS staff are active state wide in Children’s Policy Councils, and CAS hosts the Jefferson County Policy Council at its Center for Youth and Families.

The foundation of CAS’ services lies with Trauma-Informed Care. In 2015, CAS began the process of becoming a Trauma-Informed Care Organization by engaging a national consultant to lead staff and the Board through a self-evaluation process. CAS has committed to assist families with problem-solving and processing trauma, providing support and creating healthy relationships.

Thank you for visiting the CAS site. Our current terms and conditions of use are below and are effective as of May 1, 2019. Please check back from time to time for updates and changes. If you have questions about these terms or our site, please contact us at info@childrensaid.org.

Ongoing support is important to enabling projects to continue their work, so we encourage donors to continue to contribute to projects over time. But if you must cancel your recurring donation, please notify us.

Links to third party sites may be provided. If you click on these links, the link takes you to sites over which we have no control and for which we are not responsible. Please review the terms and privacy policies of any linked sites. Content of linked sites is owned or licensed as described in the sites.

All content on this site is owned or licensed by CAS. The CAS logo is our service mark. Images are licensed from the respective copyright holders. You agree to respect all copyright, trademarks, and other legal notices, information, and restrictions contained in any content accessed through this site. You also agree not to change, translate, or otherwise create derivative works of the content.

Permission for Use of Materials

The right to download and store or output the materials in our website is granted for the user's personal use only, and materials may not be reproduced in any edited form. Any other reproduction, transmission, performance, display or editing of these materials by any means mechanical or electronic without our express written permission is strictly prohibited. Users wishing to obtain permission to reprint or reproduce any materials appearing on this site may contact us directly.

CAS has adopted a general policy regarding copyright in accordance with the Digital Millennium Copyright Act of 1998. CAS takes down content that is the subject of a compliant DMCA takedown notice. Section 512 of the DMCA provides the rules for reporting copyright infringement and for filing a counter-notification. If you’re not sure whether material on this site infringes on your copyright, please consult with an attorney before filing a DMCA notification. Misrepresenting that material infringes on your copyright may subject you to liability for damages, including costs and attorneys’ fees incurred by us or other parties. If you believe that your copyright is being infringed, you can file a DMCA notification by emailing info@childrensaid.org. Your claim must include the following information (please note that all information must be submitted in English): o an electronic or physical signature of the person authorized to act on behalf of the owner of the copyright interest; o a description of the copyrighted work that you claim has been infringed; o a description of where the content that you claim is infringing is located on the site so that we may locate the content at issue; o your address, telephone number, and email address; o a statement by you that you understand that under 17 U.S.C § 512(f) you may be liable for any damages, including costs and attorneys’ fees, if you knowingly and materially misrepresent that reported material or activity is infringing; o a statement by you that you have a good faith belief that the disputed use is not authorized by the copyright owner, its agent, or the law; and o a statement by you that the information in your notice is accurate and, under penalty of perjury, that you are the copyright owner or authorized to act on the copyright owner’s behalf. Submitting your notification by email is the fastest way to file your claim, but you may also send the required information to our copyright agent at the following address: Chief Operating Officer Children’s Aid Society of Alabama 2141 14th Avenue South Birmingham, AL 35205

CAS stands in partnership with minority and other marginalized populations in our community, while we navigate a global pandemic, and address the trauma caused by acts of social injustice across our nation. We commit to hearing all voices and concerns regarding inclusion and equal treatment, and to continually improving our service to the community through our collective strengths, made possible by our individual differences.